“Rise and Decolonize” banner at the Dec, 12th, 2011 port shutdown in Seattle.

The indigenous liberation movement Idle No More has called for three days of action this week:

2. Idle No More Day of Action, March 21st (it is also the  International Day for the Elimination of Racism)

3. Worldwide Water Day, March 22nd (in Seattle there will be a Water Blessing Ceremony on Saturday, March 23rd)

Thursday, March 21st there is a march organized in response to Idle No More’s call to action.  This march will go from Westlake Park to the  SSA Marine headquarters and SSA Marine’s Terminal 18 at the Port of Seattle.  Terminal 18 is the largest container terminal in Seattle; it is one of the terminals that was blockaded during the Decolonize/ Occupy West Coast Port Shutdown.

SSA Marine is one of the corporations pushing the construction of 5 coal terminals in the Pacific Northwest. It is also a corporation enabling wretchedly racist treatment of port truckers at the Port of Seattle (including segregated bathrooms) and at the Port of LA.

Meanwhile, maritime capitalist corporations are also attacking longshore workers. In late February 2013, United Grain Corporation locked out Local 4 ILWU workers at the Port of Vancouver (WA). We side with longshore workers against these capitalist attacks on their union, and invite them to join us in building solidarity on the waterfront with anti-coal and  indigenous liberation struggles.

Here is a flyer that BOC members and friends will be passing out to truckers at the Port of Seattle this week to help build solidarity with Thurs’ action. Please contact us if you would like to help distribute these flyers. 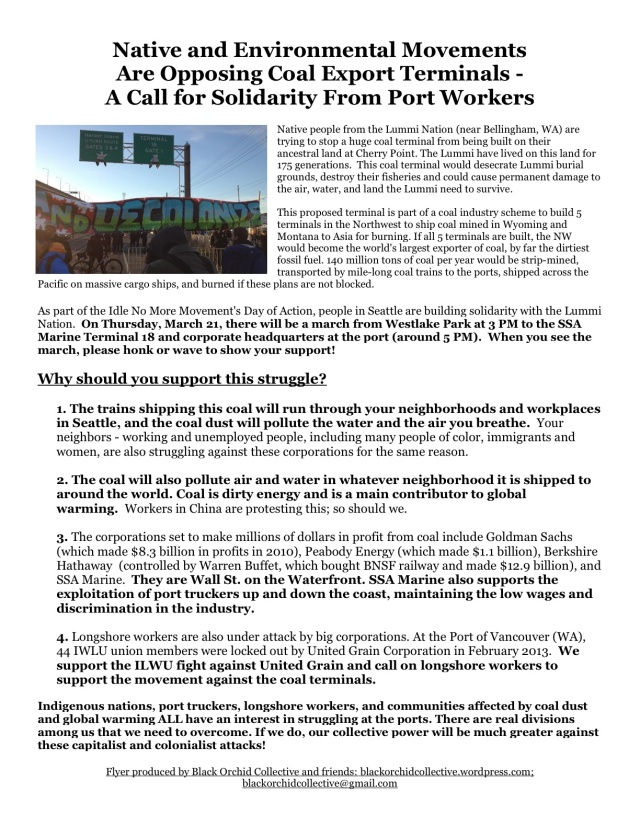 Text of the flyer:

Native people from the Lummi Nation (near Bellingham, WA) are trying to stop a huge coal terminal from being built on their ancestral land at Cherry Point. The Lummi have lived on this land for 175 generations. This coal terminal would desecrate Lummi burial grounds, destroy their fisheries and could cause permanent damage to the air, water, and land the Lummi need to survive.

This proposed terminal is part of a coal industry scheme to build 5 terminals in the Northwest to ship coal mined in Wyoming and Montana to Asia for burning. If all 5 terminals are built, the NW would become the world’s largest exporter of coal, by far the dirtiest fossil fuel. 140 million tons of coal per year would be strip-mined, transported by mile-long coal trains to the ports, shipped across the Pacific on massive cargo ships, and burned if these plans are not blocked.

As part of the Idle No More Movement’s Day of Action, people in Seattle are building solidarity with the Lummi Nation. On Thursday, March 21, there will be a march from Westlake Park at 3 PM to the SSA Marine Terminal 18 and corporate headquarters at the port (around 5 PM). When you see the march, please honk or wave to show your support!

Why should you support this struggle?

1. The trains shipping this coal will run through your neighborhoods and workplaces in Seattle, and the coal dust will pollute the water and the air you breathe. Your neighbors – working and unemployed people, including many people of color, immigrants and women, are also struggling against these corporations for the same reason.

2. The coal will also pollute air and water in whatever neighborhood it is shipped to around the world. Coal is dirty energy and is a main contributor to global warming. Workers in China are protesting this; so should we.

3. The corporations set to make millions of dollars in profit from coal include Goldman Sachs (which made $8.3 billion in profits in 2010), Peabody Energy (which made $1.1 billion), Berkshire Hathaway (controlled by Warren Buffet, which bought BNSF railway and made $12.9 billion), and SSA Marine. They are Wall St. on the Waterfront. SSA Marine also supports the exploitation of port truckers up and down the coast, maintaining the low wages and discrimination in the industry.

Indigenous nations, port truckers, longshore workers, and communities affected by coal dust and global warming ALL have an interest in struggling at the ports. There are real divisions among us that we need to overcome. If we do, our collective power will be much greater against these capitalist and colonialist attacks!