No Throwing Away Our Youth! No New Juvie!

Posted on June 28, 2012 by blackorchidcollective

BOC and friends have been flyering every weekend for the last month and a half against the city rebuilding and expanding the Central District juvenile detention center. There will be a vote on the $200 million tax levy on August 7th. The Seattle Times, unsurprisingly, is recommending voters approve the tax levy calling it “sensible” and “not a luxury, but an overdue replacement for a critical public service.”

Last week the No New Juvie coalition organized a poetry reading and film showing (Visions of Abolition and clips from the Black Prisoners Caucus 2006 Summit). It was followed by a noise demo outside the current juvie building. Tupac and Lil Boosie were played loud over a sound system and pots / pans / buckets were used to make noise for over an hour. The walls /windows are thin enough that some degree of communication with youth inside can happen.

Below is the flyer we produced breaking down why there has been a continued boom in prison (re)construction.

There are two upcoming events that the No New Juvie coalition is planning:

We’ll expose how Seattle Steam is planning to heat the new juvie with heat generated at the incinerator downtown, creating pollution that will harm the health of poor people living there, while they lock up people of color in the expanded jail.

** July 26th : Rally and Picket to Shut Down the Juvenile Jail
Rally at Noon at the King County Juvenile Detention Center, 1211 E Alder (meet @ 12th and Alder)
Picket lines will aim to shut down the juvie, like we shut down the port of Seattle on Dec 12th 2011 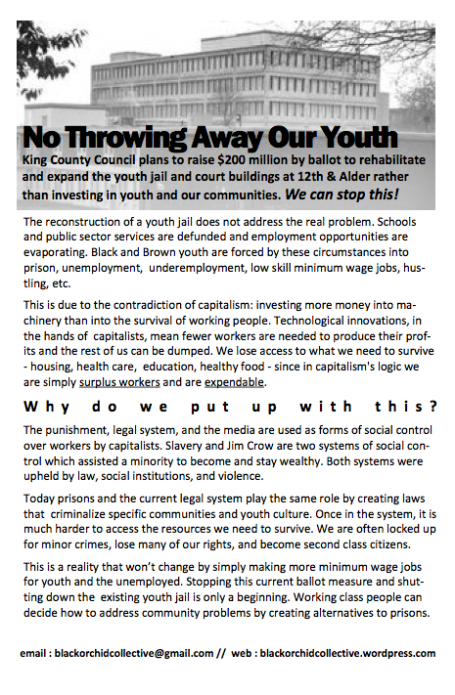 This entry was posted in Race, What's up in Seattle, Youth and tagged Black liberation, people of color, police brutality, race, recognize and record, Seattle, Youth. Bookmark the permalink.

7 Responses to No Throwing Away Our Youth! No New Juvie!